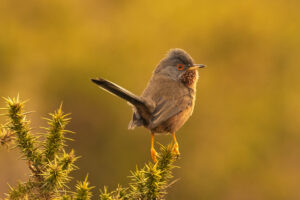 Dartford warblers are iconic birds of heathland environments. Affectionally known as ‘Darties’, these charismatic little birds can be seen on Pebblebed Heaths National Nature Reserve all year round. Other warblers, such as the whitethroat or willow warbler, migrate to warmer countries during the winter months, returning to the UK to breed in the spring. Not so the Dartie. These birds are resident and often don’t travel very far during their lifetime. Most of the Dartford warblers living on the Pebblebeds will have hatched somewhere on the nature reserve, so can truly be said to be ‘our Darties’.

Darties rely on heathland vegetation to survive, loss of heathland from our landscape nationally has resulted in a decline of this special bird, making remaining areas even more precious. In the 1990s the Pebblebed Heaths held 8% of the UK population of these birds, making it an important stronghold and part of the reason the Pebblebed Heaths are legally protected as a nature conservation area.

Dartford warblers in the UK are at the northern edge of their range which extends down into continental Europe. For birds that weigh just 9-12 grams, with a diet of spiders and insects gleaned from the gorse and heather, winter can be tough and cold weather plays a huge part in the fortunes of these birds. Population crashes closely mirror severe winter weather, seen in 2009 and following the ‘beast from the east’ in spring 2018 when the Dartie population on the Pebblebeds crashed by 75% to just 25 territories. We cannot prevent prolonged snowfall and freezing weather, but we can help surviving birds rebuild their population.

The conservation teams on the heaths work to get the habitat in the best possible condition before the start of the bird breeding season, so it can provide shelter, foraging and nesting opportunities, so that birds can nest and raise young without disturbance. Each spring we monitor the number of Dartie territories across the heaths, this takes expertise and dedication from staff and volunteers who spend hours between March to May, systematically recording the activity of the birds. This enables us to track how our population is faring. Since 2018 numbers have steadily increased year on year, with 2021 returning a count of 192 territories across the Pebblebed Heaths NNR. This just goes to show that given the opportunity these birds can bounce back.

Given the right conditions a Dartie pair can raise two, or sometimes three broods in a summer breeding season. The more broods a pair has, and the more chicks that fledge, the better the recovery of the population and the more secure their future. This winter has been warm, and we hope that good weather continues, and new territories will be occupied this year.

Everyone that spends time on the heaths can play a part in ensuring these birds continue to thrive. It is surprisingly simple…just give them space. By choosing to stay on the main tracks whether on foot, cycle or horseback you are giving Darties the freedom to feed, nest and rear young without fear. Between March and August, if you are out with a dog, ensure they always remain with you on the tracks as you’ll be actively protecting not just the Dartford warblers, but other birds that nest on the ground and in the heather.

Next time you are out on the Pebblebed Heaths give yourself a pat on the back, and perhaps your dog an extra treat from us, in the knowledge that you are sharing this special place with wildlife and giving them the space, they need. Even if you are not lucky enough to glimpse a Dartie on your visit, rest assured that within that haven of gorse and heather they are doing what they can to restore their energy and feed up ready for the action to start come spring.