The River Otter Estuary covers an area of 33 hectares and along with the cliffs of Otterton Point is designated a site of Special Scientific Interest (SSSI) because of the fine saltmarsh habitat it supports and the adjacent Triassic sandstone rocks of considerable paleontological interest. For more information please look here. Part of the area is also a Marine Conservation Zone, for more information see here.

The Pebblebed Heaths Conservation Trust manages and maintains the estuary. The site is adjacent to Budleigh Salteron and is home to one of the most popular footpaths in East Devon, running alongside an old 18th Century embankment that cuts through the floodplain.

The estuary itself contains a wide range of saltmarsh communities, which together with additional areas of reed bed, tall herb and scrub support high numbers of breeding and overwintering bird species. Over 120 species of bird have been recorded on the site, including a number of particular conservation interest, including the whimbrel and black-tailed godwit.

Current work on the estuary includes: increasing wading bird interest through the creation of scrapes on the adjacent marshland habitat; the management of reed beds; the provision of interpretation and the control of invasive species.

Whilst exploring the river please follow the Otter Estuary Visitor Guidance to help protect this special place and show consideration to all wildlife and other visitors. 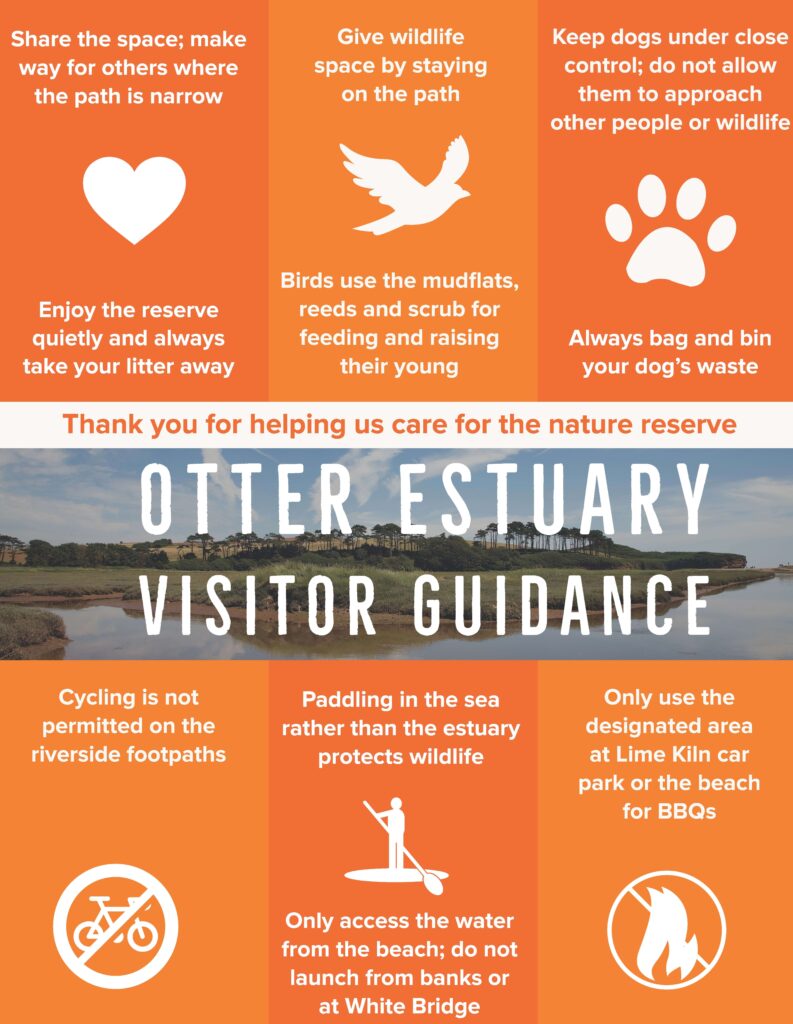 Our local conservation partners include the East Devon Area of Outstanding Natural Beauty, the Otter Valley Association and the Devon Bird watching and Preservation Society.

The River Otter estuary sits within the East Devon area of Outstanding Natural Beauty. The network of paths that allow access to the site have been enjoyed by members of the public. While cycling is not allowed, hundreds of thousands of people make use of the paths each year for walking, running and dog walking. They link up with the South West Coast path and the combined network allows access up and down the east and west sides of estuary. There are several lovely circular walks that come be done between Otterton and Budleigh Salterton Beach and around the lower end of the estuary. You can find out more about the network of paths from Devon County Council on their website here.

To access the estuary from the south, there is car parking provided by East Devon District Council close to the estuary mouth and Budleigh beach at Lime Kiln car park. An additional car park will be provided further to the north as part of the PACCo project. You can find out more here.

The estuary is a Site of Special Scientific Interest (SSSI) supporting fragile habitats that are easily damaged so please be mindful of how you enjoy the site. You can find out more about the wildlife you might expect to encounter on our wildlife page [hyperlink to wildlife tab]. Dogs should be kept on the path and under close control. Access on foot is not permitted in the estuary itself, so please enjoy the reserve from the paths and the shingle bar that is part of Budleigh Salterton Beach. Please do not disturb any wildlife, remember to take all of your rubbish away with you and, if you are a dog walker, please removes your dog’s waste during your visit. Bagged dog waste can be disposed of in any litter bin or dog waste bins located in Lime Kiln car park or on South Farm road.

A public right of navigation gives access to watercraft entering from the sea along the main channel as far as White Bridge. Launching from banks or the estuary side of the shingle bar is not permitted.

The Otter Estuary is nationally important for nature and is protected as a Site of Special Scientific Interest (SSSI). It is made up of salt marsh and mudflats; these rare environments support plants and animals that are specially adapted to thrive in the extreme conditions created by tidal flooding. Where the tide reaches its limit reedbeds and scrub grow. All of these habits create a nature reserve that is home to a rich array of wildlife all year round. Look out for breeding birds in the summer including swans with their cygnets and the elusive but noisy Cetti’s warbler. During the winter months there are good views of duck, geese and wading birds that will be resting and feeding.

Mammals including dormice, bats and otters can be found in the lower Otter Valley, with the beaver being amongst the most recent colonists.

The lower rush and sedge-dominated portion of the valley is also relatively species-rich and forms part of the Otter Meadows County Wildlife Site. This supports populations of rare plant species including the divided sedge (Carex divisa). Historically, galingale (Cyperus longus) and early marsh orchid (Dactylorhiza incarnata) have also been recorded, but not in recent years.

The lower Otter Valley is currently the site of a project which will reconnect the river to its floodplain, creating 55ha of new intertidal habitat and protecting public access in the face of climate change, rising sea level and failing sea defences. This is part of the part Interreg-funding PACCo project, which you can find out more about here.

The creation of these rare habitats will create more space for nature to thrive, being particularly valuable to over-wintering and migratory birds. The new creek network will also provide a highly productive nursery, feeding, and spawning ground for commercially and ecologically important fish. These include herring, cod, whiting, sea bass, mackerel, salmon, sea trout and plaice

The Lower Otter Estuary is a very special place. It provides a habitat for a wide variety of breeding and wintering bird species, whilst being enjoyed by tens of thousands of visitors each year. This site, however, faces growing challenges due to climate change.

The Lower Otter Restoration Project aims to work with local people and partner organisations to explore how we can preserve and improve the downstream section of the River Otter, its estuary, and its immediate surroundings for future generations in the face of a rapidly changing climate.

Planning approval was granted on 6th January 2021. Work on the project started in the spring of 2021 and will be completed in 2023.

Around £8.5 million of the Lower Otter Restoration Project funding is being provided by the EU’s Interreg France (Channel) England Programme, co-financed by the European Regional Development Fund (ERDF), as part of Project PACCo – Promoting Adaptation to Changing Coasts. PACCo’s aim is to highlight the impacts of climate change on coastal communities and to demonstrate that pre-emptive adaptation to climate change is far better and less costly to society than inaction. The project focuses on two pilot sites: the lower Otter Valley, East Devon, England (www.lowerotterrestorationproject.co.uk) and the Saâne Valley in Normandy, France.

To find out more about PACCo and the two sites as well as regular blogs, news information and links to the project’s social media, visit the website www.pacco-interreg.com